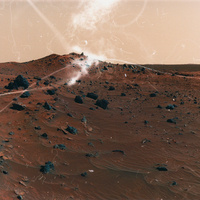 Join us for a free party to celebrate our winter season of exhibitions, including A Handful of Dust: From the Cosmic to the Domestic; Extending the Frame: 40 Years of Gallery TPW; Nir Evron: A Free Moment; and Clea Christakos-Gee: A piece A seed A spread. Light refreshments and a cash bar will be available.

A HANDFUL OF DUST: FROM THE COSMIC TO THE DOMESTIC
A Handful of Dust features a selection of modern and contemporary images from the last 100 years, focusing on the visual representation of dust in photography, both as an element of the everyday and as poetic allegory. Demonstrating photography’s ability to highlight quotidian details of life through the unlikeliest imagery, the exhibition touches on a wide range of subjects, including aerial reconnaissance, the American dustbowl, Mussolini’s final car journey, and the wars in Iraq. A Handful of Dust showcases photographic works by renowned artists Man Ray, Marcel Duchamp, Walker Evans, Sophie Ristelhueber, Xavier Ribas, Jeff Wall, and many others, alongside anonymous press photographs, postcards, magazine spreads, and films.

EXTENDING THE FRAME: 40 YEARS OF GALLERY TPW
Extending the Frame: 40 Years of Gallery TPW celebrates 40 years of exhibitions and programs at Gallery TPW, the artist-run centre founded in 1977 as a platform for contemporary photography in Toronto. Drawing on archival materials from the Art Gallery of Ontario and artworks from the collection of the Ryerson Image Centre, the exhibition and accompanying publication highlight the gallery’s role in advocating for the cultural recognition of the medium in Canada.

NIR EVRON: A FREE MOMENT
Israeli artist Nir Evron’s film A Free Moment (2011) draws together political history and formal exploration. Shot in the abandoned shell of the never-completed Jordanian Summer Palace in East Jerusalem, this four-minute film reveals a dizzying perspective on the structure’s concrete bulk and the city sprawling beneath it. Though silent and restrained, A Free Moment suggests that long-ago political conflicts can have persistent influence, disorienting lives and altering the meaning of public spaces far into the future.

CLEA CHRISTAKOS-GEE: A PIECE A SEED A SPREAD
A piece A seed A spread interprets the conceptual poetry of Yoko Ono through photography. The images are prompted by a selection of instructional texts sourced from Ono’s 1964 book and artwork Grapefruit. The poems draw connections between nature and our bodies, private and social consciousness, breathing and the senses. Following her lead, Christakos-Gee’s photographs are personal and intuitive, bringing into relationship available subject matter and people important to her environment. Ono’s instructions are translated through visualization, active collaboration, and the chance element of film photography. With this text–image exchange, A piece A seed A spread reflects the interplay and reciprocity that can exist across the production of both mediums.