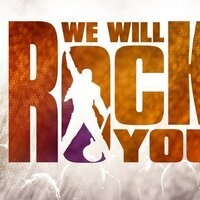 We Will Rock You

WE WILL ROCK YOU is a quirky, eccentric and heartfelt story of outsiders. It is also a creative cautionary tale for the cyberage. WE WILL ROCK YOU follows two revolutionaries, Galileo and Scaramouche, on a quest to save rock n’ roll in a post-apocalyptic world where there are no musical instruments and rock n’ roll has died.

Since 2002 over 16 million theatregoers in 19 countries have been thrilled by this awe-inspiring production which is based on the songs of Queen with a book by Ben Elton (The Young Ones, Blackadder, Popcorn). Elton fashioned this futuristic story around more than 24 of Queen’s biggest hit songs.

With Queen’s Brian May and Roger Taylor as music supervisors and “a band without parallel in the theatre” behind the cast, the audience can expect WE WILL ROCK YOU to rock as fiercely as the best of Queen’s concerts.