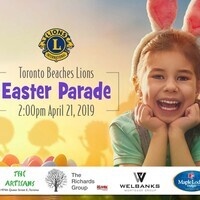 Every spring the annual Beaches Lions Club Easter Parade brings Queen Street to life with colour, music, fun and entertainment. The parade was first started in 1967 by the East Toronto Community Association to mark Canada’s Centennial year. In 1973, the Toronto Beaches Lions Club started to take an active role in the organization and supervision of the parade. By 1981, the Lions became the official organizer of the parade.