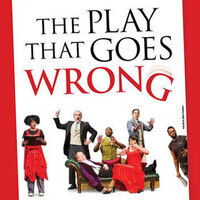 The Play That Goes Wrong

What would happen if Sherlock Holmes and Monty Python had an illegitimate Broadway baby? You’d get The Play That Goes Wrong, Broadway & London’s award-winning smash comedy! Called “a gut-busting hit” (The New York Times) and “the funniest play broadway has ever seen” (HuffPost), this classic murder mystery is chock-full of mishaps and madcap mania delivering “a riotous explosion of comedy” (Daily Beast).

Welcome to opening night of The Murder at Haversham Manor where things are quickly going from bad to utterly disastrous. With an unconscious leading lady, a corpse that can’t play dead, and actors who trip over everything (including their lines), it’s “tons of fun” (HuffPost) and “comic gold” (Variety) – sure to bring down the house!

Of course, it’s true that treadmills for home under 500 won’t be as well equipped with features as the expensive options. They might be made of slightly less durable materials and they definitely won’t have advanced features like online connectivity.
https://thereviewbox.com/best-treadmills-for-home-under-500-reviews/

Thanks for your sharing. I realize a lot of useful things from this article http://potty-racers2.com

This is extremely helpful info!! Very good work. Everything is very interesting to learn and easy to understood. Thank you for giving information.

Thank you for this amazing website, Its really helpful to all those who are new to this. btw, read this now https://helixjump2.com