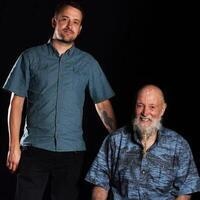 Intricate and often improvisational with elements of minimalism, jazz, ragtime, and north Indian raga. Terry Riley was influenced by John Cage and John Coltrane. His works, such as In C and A Rainbow in Curved Air, have influenced virtually every contemporary classical and many rock composers since, including Peter Townshend, Lou Reed, and Radiohead. The first part of the program features Tracy Silverman on electric violin, followed by Terry and his son, Gyan, on electric guitar.