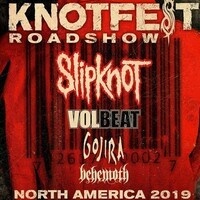 SLIPKNOT are at once popular and critically recognized, despite their unflinching and uncompromising pursuit of their art.   Emerging twenty years ago from Des Moines Iowa, the band’s 1999 eponymous debut album is widely regarded as a modern day classic and was honored by Metal Hammer magazine as the ‘Best Debut of the Last 25 Years.’