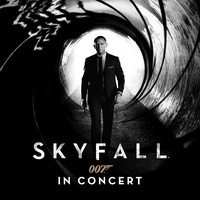 Daniel Craig returns as the legendary secret agent, James Bond, in the franchise’s most successful film to date. Directed by Sam Mendes, SKYFALL pits 007 against a ruthless cyberterrorist and former British agent. From a thrilling chase across the rooftops of Istanbul to the violent underworld of Macau, Bond’s action-packed pursuit ultimately leads to the streets of London, and the very heart of MI6 itself. Experience composer Thomas Newman’s BAFTA-winning original score performed live by the Motion Picture Symphony Orchestra in sync to the picture, conducted by Evan Mitchell.