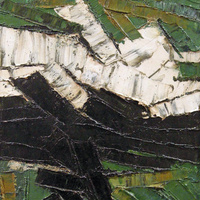 Rita Letendre turned 90 this fall, and she remains one of the leading abstract artists in Canada, and a legendary icon for women artists. She is best known for her hard-edge abstract works from the 60s and 70s, some of which were presented as epic wall murals in public locations in Toronto. But her roots lie in Quebec, and in her student days at the École des beaux-arts where she, like Françoise Sullivan, was exposed to the example of Paul-Emile Borduas. The works gathered in this exhibition are from the late 50s and early 60s, and they spring from that transformative moment in Quebec culture. Unlike Sullivan, Letendre was not an official member of the Automatiste movement, but her impulse to embrace freedom of expression and tap into primal energy clearly mark her as a kindred spirit.

Letendre grew up in Drummondville, Quebec, of mixed Abenaki and settler heritage, but it was her Abenaki grandmother, Marianna Ledoux, who she says really taught her how to live. Letendre remembers: “If there was a big storm she would take me out in the field in all the thunder and she would say — this is nature and it is beautiful. Don’t be afraid.”

Rita Letendre is one worlds greatest abstract artist in my opinion.
https://games.lol/design-home/

AS part of the Toronto events Rita Letendre Earth, wind and fire is a leading abstract that’s a legendary icon of women artists. The freedom of expression and tap the primal energy we can clearly http://www.getinternetprovider.com/ mark the spirit. We can also make out the way of thunder.

This page gives you a lot of information. Thank you!
https://webnovel.online