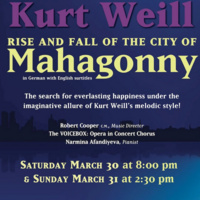 Rise and Fall of the City of Mahagonny

VOICEBOX: Opera in Concert concludes the current season with Kurt Weill and Bertolt Brecht’s RISE AND FALL OF THE CITY OF MAHAGONNY, an unblinking look at social tensions in Weimar Germany. The work premiered at the Neues Theater in Leipzig in 1930. Weill and his collaborator Bertolt Brecht had been hailed for their ground-breaking satire THE THREEPENNY OPERA.
‘Oh Moon of Alabama’, ‘Let’s go to Benares’, and ‘Deep in Snow-white Forests’ are three of the songs from MAHAGONNY that have crossed over from the stage to the concert hall whether sung by opera stars from the original production or jazz singers in the 50s and 60s.
The two performances will be at the St Lawrence Centre on Saturday, March 30th at 8 pm and Sunday, March 31st at 2:30 pm.

it's gonna be a relly great event! I should recomment ot my friend who's a musician. I guess it can be useful for her, because she has a lot of college papers and essays to do. Sure, I've recommended her https://gpalabs.com/ too.