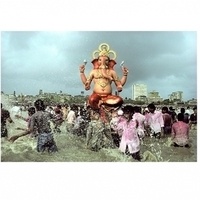 One of India's most visionary and celebrated pioneers in colour photography, Raghubir Singh (1942–1999) was a prolific photographer whose creative style revealed the dramatic palette of India’s streets, places and peoples through a distinct lens. Tracing the full trajectory of his career from the late 1960s to his last unpublished projects of the late 1990s, this exhibition showcases the iconic depictions of Indian life and culture in vivid colour.

With India as his lifelong subject, Singh’s artistic vision was at the intersection of East and West; where Western modernism blended with traditional South Asian modes of seeing and representing the world. Using a handheld camera and slide film, Singh’s approach to composition, subject, framing, and lighting, coupled with his embrace of colour presented a unique Indian style of modernist photography that was, as he put it, "on the Ganges side of modernism."

The exhibition is organized by The Metropolitan Museum of Art with the cooperation of Succession Raghubir Singh.

Quite a staggering post. I just disclosed your blog and expected to express that I really remembered the http://www.thebangaloreescorts.in experience of inspecting your blog areas. Either way I'll get into your feed and I'm sure you'll post again soon
http://www.modelescortsindelhi.com/

We can’t compare our service to other agencies because we are new in this market, but we have potential worker who can definitely change the mind of the clients such as we may be one of the strong rival in this field. When we entered into this market then we had a few amount of escorts profile within three months it is increased and all are having attractive quality.
http://sheenaoberai.co.in/escorts-in-paharganj

Skinny escort girls are having slim personality and much youngest escort girl they are favorite for most of escort-seeker who want to make a casual date with them here we have been giving a link on this page such as you can choose one of the skinny escort girl in this aspect just visit this website and contact us.
http://sheenaoberai.co.in/russian-escort-delhi

Looking for ultra-sexy escort lady; here I am giving the link of ultra sexy escort ladies and by this link you can see the album of them such as book this escort lady by clicking the website of escort service and fix an appointment with them.
http://sheenaoberai.co.in/gurgaon-russian-escort

I have perused your post blog and I discovered loads of educational stuff from your website which is extremely valuable. I should express profound gratitude for distributing. I will impart this to my companions and other social locales.

Keep sharing your blog with updated and useful information.I am very pleased that I stumbled across this in my search for something relating to this sites.I have also bookmarked you for checking out new posts.
http://www.mahipalpurcallgirls.com/photos-gallery/

Waw here i found some quality content that i was looking for. Amazing way of writing and information is too good thanks for sharing
https://washingmachineonline.org/best-fully-automatic-washing-machine-india/
https://chimneyonline.in/pigeon-chimney-price-list/
https://allreview4u.com/best-rice-cooker-in-india/