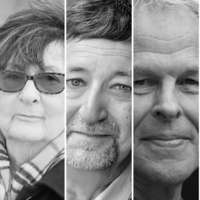 With vivid imagery and expertly-paced plot lines, it’s no wonder that this lineup of authors all have ties to the screen world. In their latest novels, these authors examine how a cast of characters can come together unexpectedly by a single event. Join Maureen Jennings (Heat Wave), author of the books that inspired the TV show Murdoch Mysteries and Bomb Girls; Guy Gavriel Kay(A Brightness Long Ago), member of the Order of Canada and winner of the World Fantasy Award; Linden MacIntyre (The Wake), former host of The Fifth Estate, where he earned an International Emmy; and Shandi Mitchell (The Waiting Hours), award-winning filmmaker and winner of Commonwealth Regional Prize for First Book. The conversation will be moderated by Wendy O’Brien. Hosted by Emily Saso.