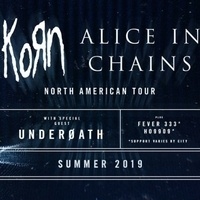 Since forming, KORN has sold nearly 40 million albums, collected two GRAMMYS, toured the world countless times, and set many records in the process that will likely never be surpassed. Vocalist Jonathan Davis, guitarists James “Munky” Shaffer and Brian “Head” Welch, bassist Reginald “Fieldy” Arvizu, and drummer Ray Luzier, have continued to push the limits of the rock, alternative and metal genres, while remaining a pillar of influence for legions of fans and generations of artists around the globe.  KORN's most recent LP, 2016's THE SERENITY OF SUFFERING, built upon the band’s