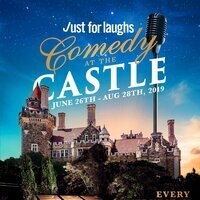 JUST FOR LAUGHS COMEDY AT THE CASTLE

Wednesday evenings from June 26th to August 28th, 2019, returning for a second season is Just For Laughs Comedy at the Castle. This side-splitting series will once again feature a line-up of hilarious comedians from the festival’s elite roster. Previous performers have included: Alonzo Bodden, Greg Proops, Robert Kelly, Gina Yashere, and Michael Kosta. The 2019 schedule will be announced soon. Dining options while onsite include full service dining in the Pavilion and gardens as well as more casual service at the grab-and-go and gelato stand.