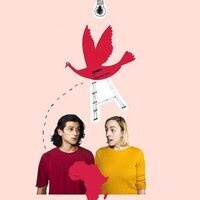 Performed in English and French, Two-Part Inventions (Les Inventions à deux voix) from
Montreal’s Les Deux Mondes makes its world premiere at Toronto’s international children’s
festival, JUNIOR. An encounter between a girl and a boy in their apartment building leads to
a journey of personal discovery. Alone in an imaginary world far away from adults, they playact their way through the range of emotions affecting their lives – from passion to boredom
to their fear of the unknown. What if “elsewhere” was just behind the door? A touching
production that children won’t forget.
Targeted to children and youth ages four to 14 and their families, JUNIOR (May 18 – 24,
2019) challenges young people to explore new perspectives and ask enlightening questions
in a live setting. Featuring world, North American and Canadian premieres, the festival
includes an extensive lineup of free and ticketed programing encompassing theatre, live
concerts, dance, puppetry, circus, storytelling, arts and crafts and more, from leading
family entertainers and artists from across Canada and around the world.

Ultra tech Cements Stocks are falling like a hell day to day. To stop this http://mahjongfreegames.online/dimensions Govt has to take an action. Share of the Ultra tech cement is going down.