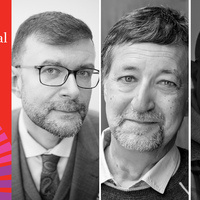 Suspend reality for a while and meet some of the world’s most praised writers of speculative fiction. Jacek Dukaj won the European Union Prize for Literature and Kościelski Award for Ice, set in an alternate universe where the First World War never broke out and the Kingdom of Poland is frozen under the power of a vicious oppressor. Order of Canada recipient Guy Gavriel Kay presents A Brightness Long Ago, set in a vivid world evoking Renaissance Italy and offering an extraordinary cast of characters whose lives come together through destiny, love and ambition. Game of Thrones meets Gladiator, in Evan Winter’s debut epic fantasy The Rage of Dragons, about a world caught in an eternal war and the young man who will become his people’s only hope for survival. The conversation will be moderated by Mark Askwith and the event’s host will be Jason Loo.