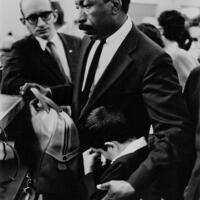 This exhibition explores a seminal photo essay by pioneering African-American photographer Gordon Parks, and the extraordinary chain of events it prompted. Published in Life magazine in June 1961, “Freedom’s Fearful Foe: Poverty” profiled the da Silva family, living in a hillside favela near a wealthy enclave of Rio de Janeiro, Brazil. Focused on the eldest son, Flávio, a resourceful twelve-year-old suffering from crippling asthma, the story elicited thousands of letters and nearly nearly $30,000 USD (more than $250,000 today) in donations from Life readers. In response, the magazine launched an extraordinary “rescue” effort—relocating the family to a new home, moving Flávio to a hospital in the United States, and administering funds to support rehabilitation of the favela. Meanwhile, in Brazil the picture story sparked great controversy in the press. The Flávio Story provides an in-depth look at Parks’ most celebrated photo essay in the context of Cold War politics in the United States and Brazil, and at the inner workings and cultural force of the “Great American Magazine.”

This blog is really informative. It's about seminal photo essay done by African-American photographer Gordon Parks. In the article, they have provided a detailed description of the events and his outstanding works. https://kaplanmd.com Everything about Gordon Park is given in detail.

I just loved your way of presentation. enjoyed reading this .Thanks for sharing and keep writing. It is Obat like this. As constantly, we appreciate yourself assurance and accept as true within us. https://sites.google.com/site/pengobatangondokberacun/

Such a very useful article. I http://freegiftcardgenrator.com/googleplay.php would like to thank you for the efforts you had made http://onlinefreegiftcodesgenerator.com/google-play.html for writing this awesome article

The magazine propelled a marvelous protect endeavor moving the possess family https://www.australianessayhelp.com/buy-essay to a fresh out of the box new home moving Flávio to a facility inside the america and managing value range to help recovery.

McDVoice, also known as McDonald’s Customer Satisfaction Survey is conducted on https://mcdvoicecom.club/. In this survey, you are allowed to share your views and opinions openly.