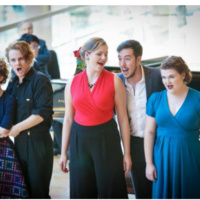 Ensemble Studio tenor Matthew Cairns made waves last year when we won First Prize at the COC’s annual Ensemble Studio Competition, in addition to the CBC Music Young Artist Development Prize. He presents a preview of the assorted collection of songs set to be recorded by the CBC for future broadcast, which ranges from composers like Duparc and Handel to Bernstein and Somers.