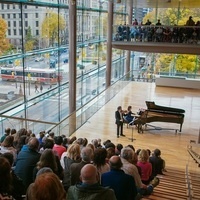 Zwei Herzen in Liebe vereint: Two Hearts United
Pianist Stephen Hargreaves explores the close relationship between Clara Schumann and Johannes Brahms through her Variations on a Theme of Robert Schumann, Op. 20 and his Piano Sonata in F minor, Op. 5. The former was written for Robert Schumann’s birthday and inspired another set of variations on the same theme by Brahms. The sonata was written while Brahms lived and worked in the Schumann household, where he also stayed during Robert Schumann’s final years in a mental hospital