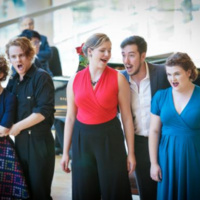 The Maiden and the Nightingale

Colombian-American soprano Vanessa Vasquez (Liù in the COC’s Turandot) is a winner of the 2017 Metropolitan Opera National Council Auditions and has been praised as an “unmistakable audience favorite whose exquisitely floated conclusion to Liù's ‘Signore ascolta!’ all but brought the house down” (Opera News). Pianist Miloš Repický accompanies her on pieces ranging from Richard Strauss to Enrique Granados.