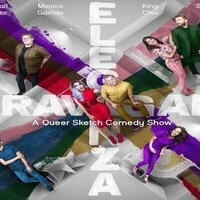 WARNING: Things are about to get EXTRA! ‘A Sketch Comedy Extravaganza Eleganza’ is a queer-forward original sketch comedy revue written and performed by the best queer sketch comedians in Toronto. After multiple sold out performances at Buddies in Bad Times Theatre, Crow’s Theatre & being named one of the top 5 comedy shows of 2018, we are proud to present this sketch revue on final time at the Second City Toronto in partnership with Pride Toronto!