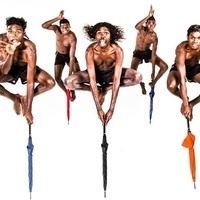 Join a joyous celebration 40,000 years in the making.

Direct from Elcho Island, Australia, Djuki Mala (Djuki meaning “Chooky” with a Yongu accent and Mala meaning “mob”) perform a high-energy and stunning fusion of traditional Indigenous culture, contemporary dance and storytelling. Toronto audiences will experience some of the more intimate moments and turning points that have shaped Djuki Mala and a rare and insightful view into Aboriginal Australia. If there is one show this year that is guaranteed to leave you feeling genuinely happy then Djuki Mala is it!

Celebrating 10 years performing this year since their 2007 Youtube clip of ‘Zorba the Greek’ went viral, they’ve thrilled audiences worldwide with reinterpretations of popular culture and traditional dances in juxtaposition with contemporary Yolngu culture.