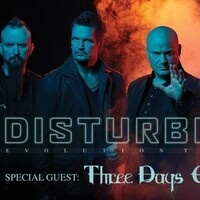 Two-time Grammy nominees DISTURBED have announced the Evolution World Tour, an extensive international arena tour that kicks off January 9th in San Diego, CA, and will see the multi-platinum-selling rock band headlining venues across the U.S. and Canada with Three Days Grace supporting.

Thanks for sharing this great. Keep sharing more useful and conspicuous stuff like this. Thank you so much
https://run3ds.com