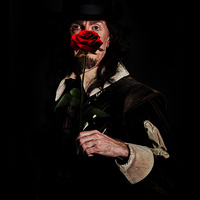 Cyrano de Bergerac is a swashbuckling 17th century swordsman who can do anything … except tell Roxane, the woman he loves, how he feels. He’s just too self-conscious about his unusually large nose. Roxane is in love with words, so when Cyrano is offered the chance to ghostwrite love letters to her from an inarticulate, love-struck cadet, he takes it — but can he ever reveal himself? A breathtaking tale about the exquisite torture of loving from afar, for anyone who has ever stood beneath a window.