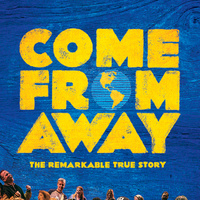 It’s been called the “edge of the world.” The weather is wild, but the locals never lack for warmth. And it’s here, in Newfoundland, where a remote town became the epicenter of a remarkable true story filled with unusual characters, unexpected camaraderie and uncommon generosity.

COME FROM AWAY is the breathtaking new musical that Toronto has embraced with open arms and has audiences leaving the theatre night after night claiming they are “proud to be Canadian!”

Written by Tony nominated Canadians Irene Sankoff and David Hein, and helmed by Tony-winning Best Director, Christopher Ashley, COME FROM AWAY "takes you to a place you never want to leave!" (Newsweek)

I am glad to be one of several visitors on this outstanding site, thanks for putting up. http://www.waiometra.com/biosafety-cabinet-a2model.html

Your opinion is very impressive. I have another aspect to look at

Go early in the morning and make sure you take something to eat and drink. Try to ask some locals about the place before you take the off-road route. All in all, the trip is enjoyable.
https://www.partyboothglasgow.co.uk/edinburgh.html