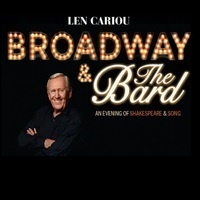 Broadway & the Bard An Evening of Shakespeare and Song

Universally acclaimed theatre and screen veteran Len Cariou returns to the stage for
Broadway & the Bard, a union of American musical comedy and Shakespeare. The 80-
minute performance features classical soliloquies and sonnets with inventive musical pairings
conceived by the writers of the Great White Way.
Broadway & The Bard combines two of Cariou’s lifelong loves – Shakespeare and musical
comedy. Giving life to an idea he’s harboured since his Broadway debut in 1969, the show
cleverly and candidly weaves Cariou’s personal reflections on his 50-year career between
beloved showtunes and Shakespearean soliloquies.
“Mr. Cariou’s delivery of his Shakespearean set pieces is exemplary, across a broad range of
emotional territory. His Iago has a nice subtly seething quality; his Petruchio a swagger,
humor and a smidgen of sensitivity; his Benedick a bruised braggadocio. The songs that
follow the verse are sometimes chosen to illuminate the feeling in the words, sometimes to
offer a kind of riposte,” New York Times’ Charles Isherwood writes.
In addition to his recurring leading role on hit series Blue Bloods, which just renewed for its
10th season, Cariou is also is a three-time Tony Award nominee and Tony Award winner
(Best Actor) for his legendary performance as the title character in the original casting of
Stephen Sondheim’s Sweeney Todd: The Demon Barber of Fleet Street – which celebrates its
40th anniversary this year. He is a distinguished member of the Theatre Hall of Fame and was
named as an Officer of the Order of Canada in 2018 for his achievements as an actor of stage
and screen.