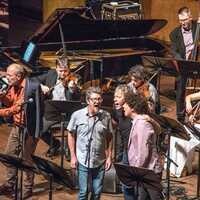 TORONTO, September 10, 2019. To mark the 50th anniversary of the release of The Beatles' Abbey Road, the Art of Time Ensemble, under the artistic direction of founder Andrew Burashko, presents the entire album - re-imagined, re-invented and performed by top Canadian artists from the worlds of pop, classical, and jazz. This very special concert runs September 26 - 28 nightly at Harbourfront Centre Theatre.

The legendary album will be performed by Canadian pop icons Andy Maize (Skydiggers), Jeremy Fisher,Craig Northey (of cult favourite Odds) and Jason Plumb (of The Waltons).

Of these artists, Burashko says "I selected these four singers because I'm a big fan of all four and we are all huge Beatles fans. I think it's the perfect combination for the songs on this album."

Some of The Beatles most enduring songs are on Abbey Road: Something, Come Together, Here Comes The Sun, Because. Get ready for a huge treat.

The Art of Time Ensemble's season sponsor is Invesco Trimark. These concerts are sponsored by Slaight Music.
***
Now in its twenty-first season, the Art of Time Ensemble is one of Toronto's most innovative and artistically resonant music ensembles. Under founding Artistic Director Andrew Burashko, the ensemble provides a unique performance experience that breaks down barriers between musical and other artistic disciplines. Art of Time Ensemble uses the vibrancy of classical music as a launching pad for an examination of contemporary artistic expression through all music and performance forms, the results appealing to a broad range of audiences.